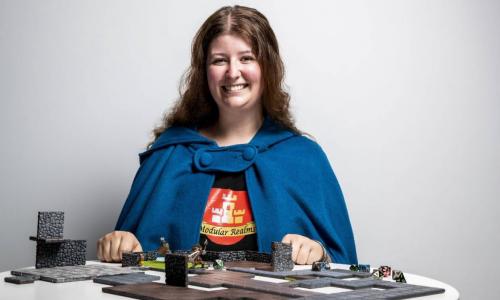 This blog post was originally published by Momentum, a programme powered by UniServices which provides facilitated access to commercialisation resources, networks and expertise to directly increase the quantum and quality of commercial opportunities arising in New Zealand.

Annabelle Collins is no stranger to fantasy worlds. But it was beyond her wildest dreams to raise more than $24,000 on Kickstarter for something she loves doing — creating worlds for Dungeons and Dragons.

As a ‘Dungeon Master’ (someone who Chairs the game), Annabelle was frustrated by the lack of 3D terrains available for hobbyists who do not want to spend north of $100 on mapping out a landscape. So she got cracking to make her own.

It was not before long that Annabelle quickly became the best Dungeon Master of the land with her modular reversible flat pack terrain pieces and others wanted to follow suit. She got constantly asked if her landscapes were for sale.

After a surge of interest from fellow campaigners, she decided to spend a lot of time at the University of Auckland’s Unleashed Space and also presented to the Canterbury Momentum Investment Committee meeting early on the piece to get strategic advice.

“The whole experience has been a whirlwind. I never imagined that my passion would become my career” said Annabelle.

Since launching her Kickstarter campaign, Annabelle has received coverage from Stuff and Sunday Star Times. She has received praise from the University of Auckland’s Centre for Innovation and Entrepreneurship.

But it was not all plain sailing for Annabelle. In May 2019, she was involved in a car crash. It resulted in minor brain trauma and it also meant that she had to pause her PhD in Chemistry. After the car accident, she could not read or write properly for three months. Working with a neuro-physiotherapist, it was found that it could take many months, if not years for her to make a full recovery. The doctors believed that doing a PhD would be too stressful and as a result, Annabelle made the heartbreaking decision to drop out.

Since then she has been on a completely different learning path on entrepreneurship. But don’t ask Annabelle if she sees herself as an entrepreneur. “ I guess I am? I don't see myself as one. More as a Dungeon Master or tinkerer. I just love making things.”

One of Annabelle’s admissions on jumping into entrepreneurship was her love of feedback and it has encouraged her to listen closely as “the feedback was fantastic. It helped me design better pieces and it was always great to hear more.”

After the Kickstarter campaign, Annabelle wants to get her injection moulding underway and run another Kickstarter early next year. Her dream is for Modular Realms to be sold in toy stores and for her role to be going to all the Comicons and “geeking out”.

The one piece of advice Annabelle would give to other founders and entrepreneurs is “you do not have to feel brave. You just need to be brave.” Take it from an accidental entrepreneur.