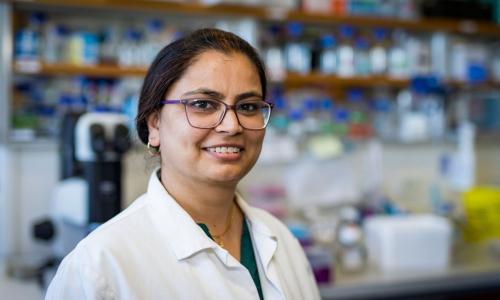 Blood cancers aren’t like other cancers. There’s no lump that can be excised, no solid tumour that can be easily targeted for radiation. Because blood flows through your whole body, so does blood cancer. Many of the symptoms these cancers produce – fatigue, fever, swollen lymph nodes, bruising – are easily mistaken for something else.

How do you treat something that seems so non-specific? For a significant number of patients, the answer is to get ultra-specific, according to groundbreaking research from the University of Auckland.

Stefan Bohlander, Peter Browett and Purvi Kakadiya (right) are members of the Leukaemia and Blood Cancer Research Unit (LBCRU) at the Faculty of Medical and Health Sciences – professors Bohlander and Browett are the co-directors of the unit, while Kakadiya is a research fellow.

The LBCRU sits within the University of Auckland’s Centre for Cancer Research, where Browett is one of the interim directors. The principal funder for the LBCRU is Leukaemia & Blood Cancer New Zealand, which has contributed $2.8 million to date.

Along with other team members, the three researchers work together on a highly personalised approach to blood cancers. Finding which specific genetic mutations led to a patient’s blood cancer can result in treatment that will work better for that patient.

In some cases, drugs that target a particular mutation can be prescribed. In others, doctors can recommend more or less aggressive treatment depending on which mutations patients have. In yet other cases, knowing whether patients have an inherited predisposition to blood cancer can determine whether relatives should or shouldn’t donate their bone marrow.

This cutting-edge research is already leading to improved outcomes for some patients and likely saving lives.

A brief history of blood cancer

Leukaemia, the most common type of blood cancer, was first described in the 1800s as a disease causing an overabundance of white blood cells. In fact, the name comes from the Greek words for “white” and “blood.”

For more than a century after leukaemia was described, it was nearly always fatal. Some treatments were developed beginning in the 1940s, but it wasn’t until the 1970s that improved chemotherapy and the advent of bone marrow transplants began to meaningfully improve survival rates.

Even today, most types of blood cancer remain difficult to treat. Personalised medicine based on individual genetics is beginning to change that for a significant percentage of patients.

Cancer and our genes

All types of cancer are caused by mutations that arise in the cells of our bodies. Environmental factors such as smoking, radiation exposure and obesity can increase the likelihood of some mutations, and some people carry inherited gene mutations that predispose them to cancer, but many cancers arise simply due to random mistakes in cell production.

Each of our cells contains 6 billion bases, analogous to letters in a book. The Bible – a tome 10 times longer than the average novel – contains about 3 million letters. That means the whole human genome, if written out, would be as long as 2,000 Bibles. Each time our genetic “book” is copied – which happens a lot, since some of our cells, including blood cells, replicate every day – mutations, like typos, are possible. Some of these “typos” can be fixed by our bodies, while others are harmless, but some can lead to cancer.

The human genome project, which began in 1990 and finished in 2003, sequenced and mapped all the bases, which are paired and twisted into DNA molecules. Fortunately, not all the base pairs are equally important. We share 98 percent of our DNA with chimpanzees. Only about 1.2 percent of our DNA comprises genes, which are segments of DNA that code instructions for functions such as making proteins. Still, each of our cells holds about 22,000 genes.

Since Bohlander, who is the Marijana Kumerich Chair in Leukaemia and Lymphoma Research in the Department of Molecular Medicine and Pathology, began his research career some 35 years ago, our understanding of genes has improved dramatically. Part of the advance has been technological. Moore’s Law states that the number of transistors on a microchip doubles once every two years, meaning computers have gotten much smaller but mightier.

“When you look at how genetic sequencing has been doing, it has outpaced Moore’s Law by a factor of two to three times,” says Bohlander. “It took 3,000 people 13 years and cost about $3 billion (U.S.) to sequence the first human genome. Now, with so-called next-generation sequencing technologies, we can sequence someone’s genome in about a day, for maybe $400. That’s made it possible to look more deeply into the genetics and acquired changes of disease.”

“By looking for mutations in those three genes, we could classify some patients into good or unfavourable prognostic groups. But about 50 to 60 percent of patients had no mutations in those genes, so they were put into an intermediate group and all treated the same way.”

Unsurprisingly, patients in this group responded differently – some went into remission while others succumbed. So Browett and his colleagues decided to start testing more genes. Initially, they developed a panel of 70 genes, which they later increased to 78, then to 111.

The group analysed the leukaemia cells of every adult diagnosed with acute myeloid leukaemia at Auckland City Hospital, more recently expanding to paediatric patients. So far, they haven’t found any two patients with the same pattern of mutations. One mutation in a gene was seldom enough to cause cancer – the average was 3.36.

Working with their clinical colleagues, the researchers put patients into genomic subgroups with different prognoses. The new genetic information put 30 percent of patients into new prognostic groups. In about 20 percent of cases, clinicians changed their treatment approach. Some patients with poorer prognoses were offered stem cell transplants early on in their treatment. Others, whose mutations resulted in abnormal proteins being produced, were offered drugs that inhibited those proteins.

The researchers also found that more patients than expected had mutations in every cell of their body, not just their cancer cells, which meant they had inherited mutations that predisposed them to blood cancer.

“That was an important finding not only because there was a risk to their family members, but also because if we were going to do a bone marrow transplant, often we’d use another family member, but if you have an inherited mutation, you don’t want to give cells from a donor that carries that mutation,” says Browett.

The researchers are also working on better ways to follow patients throughout their cancer journeys. Kakadiya has developed tests to monitor whether patients are responding to treatment and, once they’re in remission, whether they’re likely to relapse.

“Traditionally when we treat a patient with leukaemia, we define remission as the bone marrow looking normal under the microscope and the blood count returning to normal, but those tests aren’t very sensitive,” says Browett. “Purvi [Kakadiya] has developed assays that can pick out a residual leukaemia cell or molecular biomarker down to a level of one in 100,000 or even one in a million.”

“If we monitor patients’ samples every three months, and after nine months, we see that the level of mutation is higher than last time, that tells us we should do something,” says Kakadiya. “This is cutting-edge science we’re doing and it’s actually impacting patient care. It’s adding a lot of information that’s helping clinicians, patients and families. That’s what’s driving me.”